This recipe has been requested more than almost any other recipe in my repertoire. Today, I’ll let you in on my secret: a properly measured dose of cocoa and a whole lot of butter!

The Search For a Good Chocolate Buttercream Frosting Recipe

When I began my search for a good chocolate frosting, I quickly learned just how many versions of chocolate frosting already existed. After trying a few of the different varieties, I decided to dig in deep to chocolate buttercream frosting. I wanted a recipe that whips up light and fluffy and has the potential to pack a chocolate punch.

I tried several recipes and started to get a feel for what tastes best. Shortening was quickly eliminated, as it lacks in flavor and leaves a strange film on the tongue when used in frosting. (That being said, shortening works great when using for decorating on a practice board as it holds its shape and pipes more cleanly than butter). Other recipes I tried called for melted fine chocolate, which tasted good but increased the cost and effort. I was on a budget and was determined to find the perfect, everyday chocolate buttercream frosting.

After finding roughly the ingredient combination I liked, I realized it was imperative to weigh the cocoa and powdered sugar. As with any dry, scoopable ingredient, it is way too easy to pack these ingredients into the cup and the result was that my frosting varied wildly from batch to batch.

Side story: recently we confirmed that measuring cups vary in volume. Kenzie was making a batch of crispy rice treats and tried to take a shortcut by measuring the corn syrup by volume instead of weight. The result was a slightly-too-sticky bar that was difficult to handle. I keep three different sets of measuring cups in the drawer. As we were trouble-shooting what went wrong, we measured corn syrup into each cup and weighed the amount. It varied by almost an ounce between cups!

So, moral of the story: sure, you can use measuring cups, but be warned that even the most careful of measurements can be thwarted by inaccurate measuring cups.

If you’ve followed us for any amount of time at all, you’ll know the next important ingredient I’m going to talk about is butter. Salted butter, that is.

Salt is part mineral, part magic. It transforms food from bland to bursting with flavor. It tempers bitter flavors and accentuates subtle ones. Many great bakers use unsalted butter, and that works great for them. One of my greatest goals in the kitchen, besides making treats that taste good, is to keep it simple. Using salted butter often eliminates a step for me and helps to keep things as simple as possible, leaving more energy for creating and tasting!

So, in short, it was important to me to have a quality frosting that came together quickly. Butter adds a richness and a smoothness otherwise hard to come by. This frosting whips up with minimal effort and is endlessly versatile. It works well on devil’s food cake, yellow cake, brownies, or even a graham cracker frosting sandwich. This is my absolute go-to chocolate frosting.

Try it on your next chocolate frosted dessert and share with us the way you used it either on social media or in the comments! 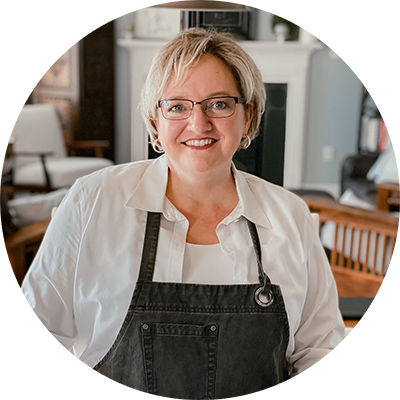